A few minutes ago, on a building site far, far away… 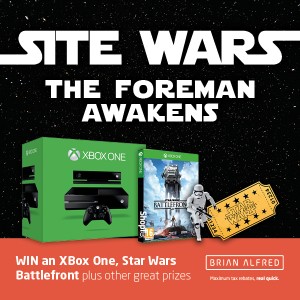 As you’re probably well aware, the next few weeks are going to be exciting if you’re a fan of the Force.

Whether you’re hankering for Han Solo, looking out for Luke Skywalker or even craving some Kolo Ren, we’ve got the perfect giveaway for you.

To celebrate the launch of Star Wars, The Force Awakens (and because our rebates are out of this world), one lucky winner will be walking away with an Xbox One, Star Wars Battlefront and two tickets to see the film! We’re calling it Site Wars, a Star Wars-themed competition just for contractors in the construction and mechanical trade.

To enter the Site Wars competition, simply head on over to our Facebook Page and give our post a like to win. And while you’re at it, why not share it and tag a mate who could do with a rebate?

The Force is definitely strong with Brian Alfred.